Five fabulous fairies flew through the crack into the garden one night when the air and was warm and still.

“How nice to be in the garden,” said Chantal. She flew to the top of the trampoline and sat on top of the safety net. She looked like a pretty, pink rosebud there.

“How nice to be outside and not cooped up in a house,” said Zaira. She zoomed down to the trampoline and bounced straight up again. It made her laugh, so she did it again and again.

“The garden smells different after a hot day, don't you think?” asked Amber. She flew into the camellia bush and sat swinging on one of the leaves.

“And the stars look so near,” said Britney, the silvery New Year fairy. “They look as if they are just hanging around the house.”

“Why,” said Chantal, rising into the air. “They are hanging around the house.”

“Let's be careful,” said Daisy. “There are Big People in the house. We don't want them to catch us.”

The five fairies towards the house, staying carefully in the shadows.

“Let's fly up to that window sill,” said Britney."The will not see us there."

The five fairies flew to a dark window and sat on the sill.

“Look,” said Amber. “The stars are on tied on a string to the house.”

“They are so beautiful,” said Chantal. “They are like jewels. Wouldn't you love to wear them?”

“But how can stars be tied to a house?” asked Daisy.

“Let's go see,” Zaira cried, and darted towards the colorful, little stars. “Do you think we could touch them?"

Five fairies followed the string of stars that decorated the house verandah.

“It's an electric cord,” Daisy told them. “These are not stars. These are electric lights. They use electricity to shine, and that is why they look like pretty stars. We must be careful not to touch them.”

“Why?” asked Britney. “Is electricksy dangerous?”

“It is certainly tricksy," Daisy told her. "It is best to be careful and not touch them ourselves."

Five fairies flew back into the garden and hovered where they could look at the lovely, shining lights.

“But aren't they pretty,” said Chantal. 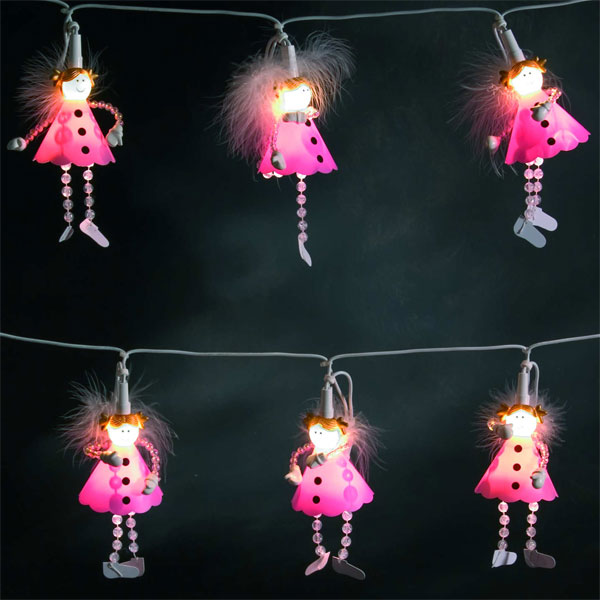 For the Big People, who are the Magicians:

Here is a picture of some fairy lights I found through Google images. They don't look like stars, but I thought they were amusing and pasted them here anyway.

Another nice thing about them is that they look as if they would be easy to make, leaving out the lights.

Here's how I think it could be done:

Part of an egg carton, the part that holds the egg, for the dress, paint it any color.

Threaded beads for the legs and arms. The threads would go through the carton with a knot to hold them in place. You might prefer a bit of glue as well. If you are uncomfortable letting your little princess (all girls are princesses) work with beads, pipe-cleaners would do just as well. In fact, pipe-cleaners would be better for posing the fairy afterwards.

Bric-a-Brac: Magic and meditations that can be found right here at Morva House.

THE CRACK IN THE GARDEN : Fairy stories for little people

Views to the Distant Hills: Cool sites that are not SF